Doorganics Delivering a Healthy Deal to Your Door 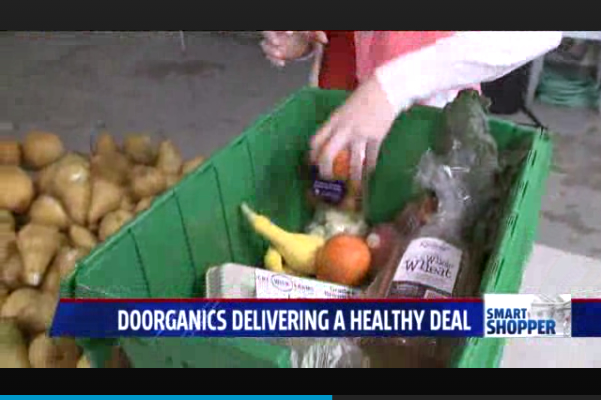 GRAND RAPIDS, Mich. (March 12, 2014) — March is National Nutrition Month and in honor of that, Mike Hughes, owner of Doorganics, which brings fresh, local grown and other organic fruits, vegetables, meats, cheeses and breads right to your door, is offering a Smart Shopper deal.

If you head to www.doorganicsgr.com, you can save $10 on your first delivery. Prices  range from $29 to $49. All of the bins are the same size, but the various prices, determine how much goes in them.

So how does this all work? Doorganics posts  a menu on Thursday morning, the week before your delivery, so you can plan for the week ahead.  When you log in, you can swap or make substitutions along with doing additional shopping. Many people like to add organic meats to their order, for an additional cost, which are  also placed in the green bin, inside of a cooler bag on the day of delivery, too.

Doorganics delivery area includes all of Grand Rapids, north to Rockford, south to Caledonia, east to Lowell, west through Walker and they just expanded to Hudsonville and Holland.

This Smart Shopper deal runs through the end of March. 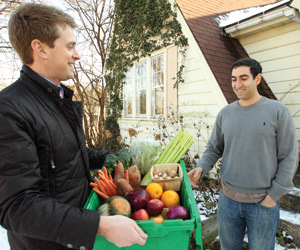 Hundreds of households and several businesses have signed up for the local and organic produce delivery service since January 2013.

To accommodate the growth, which also includes an expansion of its delivery area to Zeeland, Hudsonville and Holland, Doorganics recently purchased a second van.

Doorganics makes deliveries Monday-Thursday directly to customers’ doorsteps. The business offers two produce bin options: $29 for a small bin that feeds a family of two to three, or $49 for a large bin that feeds four to five people.

The bin items change based on availability, and households can select weekly or every other week deliveries. 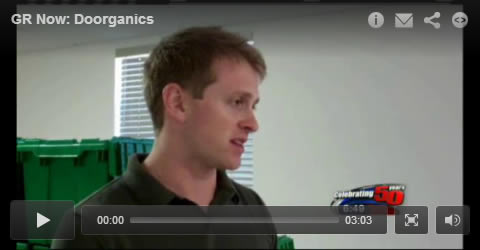 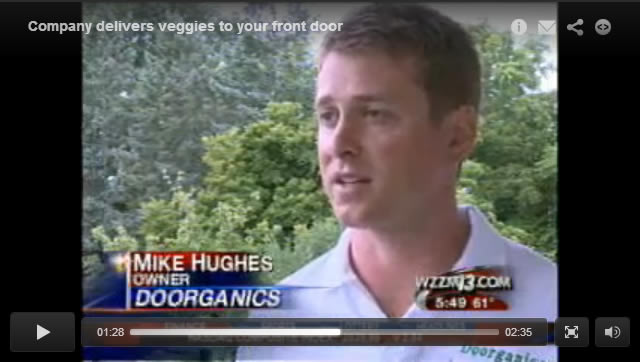 COMSTOCK PARK, Mich. (WZZM) -- If you think the only vegetables you can get delivered to your front door has to come on a pizza. Think again. A new West Michigan company is bringing farmer's market freshness directly to customers homes.

"They deliver vegetables that I have never even heard of before and have recipes on their website which is great," said Libby Stuit. "This gave us the opportunity of getting so many fresh vegetables with no pesticides. Things we wouldn't normally try. And we get to support local farmers which I think is wonderful."

If Stuit ever needed any extra motivation for eating healthy she has it now that she's carrying a child. She and her husband Paul say they love the fresh fruits and veggies you can find at local farmers markets but say with their busy schedules getting to the market is not always easy to do. So they decided to let the farmer's market come to them by signing on as one of the first customers for start-up company Doorganics. 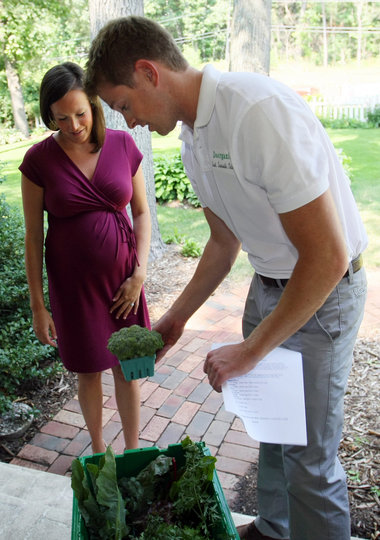 “We don’t have time to get to farmers markets so when we saw this, it was like we could bring the farmers market to us,” said Libby Stuit, 30.

Frustrations including not having time to stop by a local farmers market and a lack of local produce in grocery stores inspired Hughes’ business concept.

“The last thing I want to do is compete with the farmers markets,” said Hughes, 30, an employee benefits consulting partner at Coleman Dugan & Hughes in Grand Rapids. “I just think there’s a large number of people that would love to support local food. They just need someone to make it easier for them.” 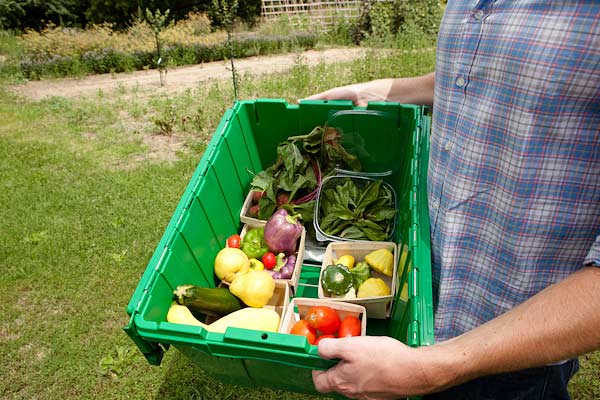 Though immersed in the benefits of making healthy choices through their professions, the busy schedules of Kortne and Todd Custer don’t permit much time for the couple to practice what they preach at home -- especially when it comes to putting food on the table for themselves and their four-month-old daughter.

“We’re both very health conscious, but there just aren’t a lot of good organic options at the grocery store, which is about all I have time for,” says Kortne, who works part-time at a physician’s office, while husband Todd is director of sales atCuster HealthWorks. “But organic is important to us, especially with a newborn.”Enter Doorganics, West Michigan’s newest addition to the organic food movement.Doorganics is a local fresh produce delivery service, connecting health-conscious but time-strapped consumers with fresh eats from Ingraberg Farm and Vertical Paradise Farms. Entrepreneur Mike Hughes, 31, founded Doorganics in July 2011 after facing time constraints similar to those experienced by the Custers. “I always wanted to go to the farmers' market, but had trouble getting there due to work and family obligations,” says Hughes. “Lots of big cities have produce delivery services, but Grand Rapids didn’t have anything like it so I thought it could be a great opportunity.”Hughes and the Custers are clearly not the only ones facing the time versus health predicament, as Doorganics has expanded from 15 to 145 subscribing households in its first month of operation. Customers run the gamut from college roommates to couples to large families to older individuals who don’t have the ability to make frequent trips to the grocery store.

Fresh as the produce being sold at area farmers' markets, a new online service has just launched that sells and delivers local produce to area residents.Doorganics is the venture launched by Mike Hughes. Hughes, whose day job involves employee health benefits, says he sees firsthand that "people need to make healthier choices" with their lifestyles.Besides his background in health care, Hughes also says he has a " a passion for supporting local," and indicates it can difficult to visit farmers' markets due to work and family obligations.The service Hughes has created is very simple. Users register online and then sign up for either the "small bin" ($29) or "large bin ($49).  Hughes and his staff assemble "cooler packs" with their choice of the freshest produce in season and then deliver to the home.  Currently, their produce is grown at Ingraberg Farm in Rockford, but they are in discussion with other producers to include in the network.

Why it’s awesome:  Fresh produce is delightfully delicious but can be difficult to acquire, unless you are able to frequent a local farmers market.  However, Doorganics has solved this dilemma by delivering fresh produce straight from the farm to your front door!

Produce is an extremely delicious and healthy part of the average diet, unless of course you are completely carnivorous.  In general, there are limited choices when it comes to obtaining your fruits and veggies.  You can either stop by your local super market, throwing mushy tomatoes and imported strawberries into your cart next to diapers and deodorant, or you can go to the farmers market.

Farmers markets offer greatly superior product, as the food often comes straight from the ground to the market.  The problem, however, comes from the lack of convenience. Some folks simply don’t have the ability to contort their schedule to match their local farmers market and therefore forego fresh produce for convenience.  However, thanks to Doorganics, you no longer have to choose between farmer’s market quality produce and convenience. 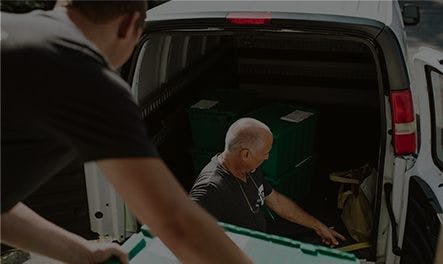 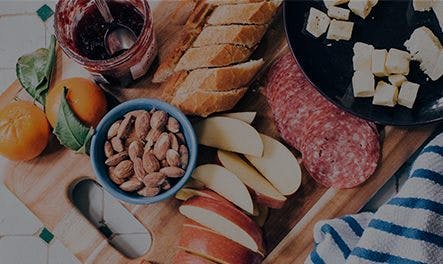 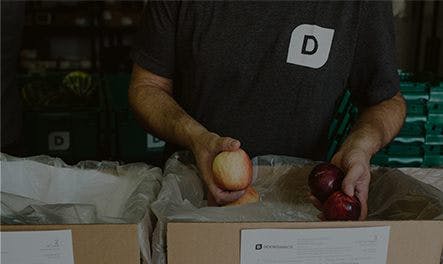